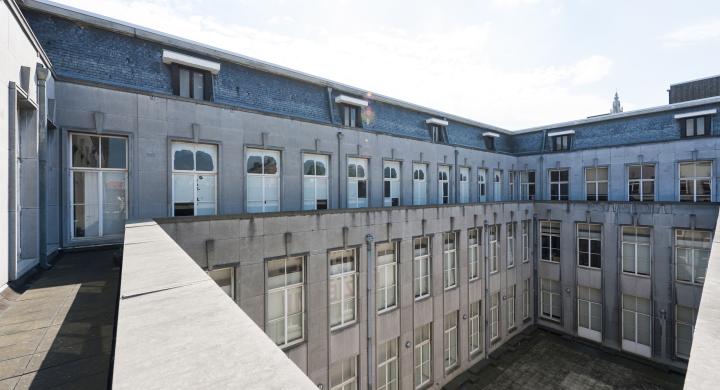 De Beukelaar House on the Minderbroedersrui in Antwerp. The large house is commissioned by and built for the successful ship-owner, Jan Lambrecht Michiels. He lives there, together with his family, from 1840 until close to his death in 1868. The offices of the Michiels-Loos company are also housed here. The building owes its name to the last private resident, Edward de Beukelaer. The biscuit manufacturer lived here from 1895 to 1910.

In 1910, the city of Antwerp buys the Hôtel De Beukelaer. The intention is to make it available to the scientific associations of Antwerp. The proposals for the rebuilding include an observatory and an auditorium.

At the outbreak of the First World War, the rebuilding plans are set aside. During the German occupation, the Kommandatur was housed in the patrician house; after the war, it is used as the Court for War Damage. In 1929 and 1930, the administration of the World Exhibition moves in.

The ‘Museum van de Vlaamsche Letterkunde' [Museum of Flemish Literature] was inaugurated in 1933. The new museum is sited in the De Beukelaer House on the Minderbroedersrui 17. The Conscience Room is opened on the first floor. The following year, a theatre room, a Buysee room, and ‘Van Nu en Straks' [From Now and Soon] room and a Youth room are added. In 1939, the second storey is also put into use as museum space.

The building soon proves too small. In 1940, a plan is approved to connect the adjacent buildings to the museum. There is now room for temporary exhibitions. Offices and the library are located above the exhibition hall. In 1941, a lecture room is opened in the old stables. The new section of the museum is badly damaged at the end of the Second World War by bombing. In 1948, an adjacent plot of land is purchased by Antwerp city council. A suitable building can be constructed there.

On the plot of land on the Minderbroedersstraat 22 there are the ruins of a badly damaged building. Only the facade is unscathed, except for the doors and windows. The building dates from the middle of the 18th century. The ground floor has been rented to the Chamber of Notaries since 1888. The rest of the house is occupied by residents. Playwright and director of the city library, Frans Gittens, is one of the them.

In 1948, city architect André Fives designs a building with three storeys for the expansion of the archive and museum.  He produces modern and forward-looking plans: two underground storage areas, an exhibition area around an atrium garden, an auditorium and a spacious entrance hall. The entrance to the museum is on the Minderbroedersstraat. The De Beukelaer House on the Minderbroedersrui will serve as administration building. It is not until 1953 that the necessary funds are found and work can begin.

The new museum building is given strong, clean lines and a lot of light and space. The impressive concrete construction is finished with bluestone.  The strength of this architecture dating from the fifties can be particularly felt in the courtyard of the museum.

The new building is taken into use in 1959. Director Ger Schmook is especially happy with the two underground storage areas. With the war still fresh in mind, the construction of these two bomb-proof archive cellars – one on top of the other – is of particular importance for him. The two cellar levels together measure 2000 m² – a gigantic storage area, which in 2008 is no longer large enough to store the complete collection of the Letterenhuis.